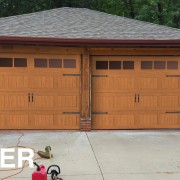 Here at Overhead Door of Garden City, we believe your garage door(s) can hugely change the look of your home. A house transforms into a home with the perfect garage door! Below are a few before and after pictures of houses we were able to upgrade. Your home is waiting! Contact us now to get yourself a brand new garage door!

This is the perfect example of how wooden garage doors, although typically more expensive, are worth the investment for a huge change to your home’s looks. 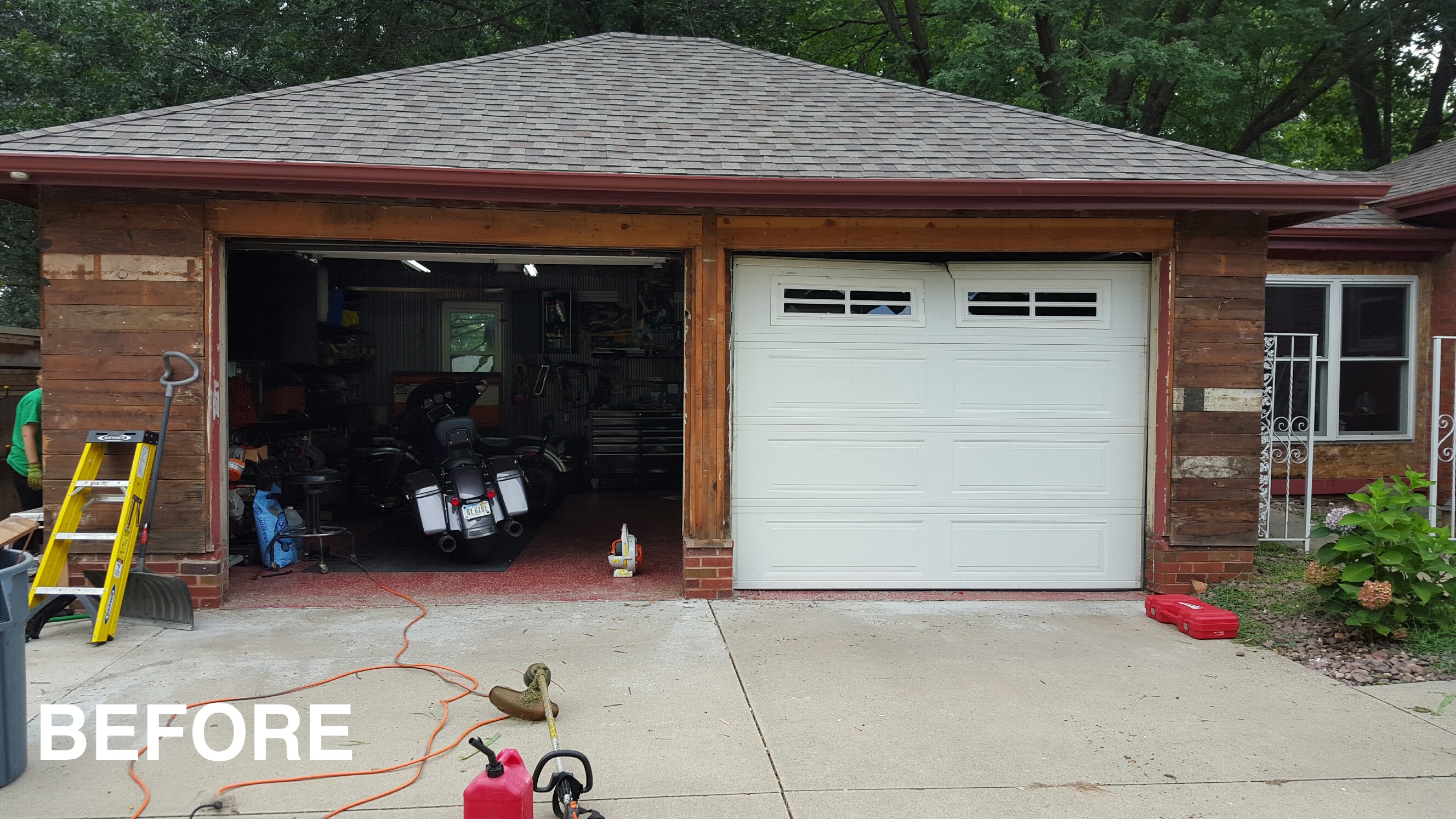 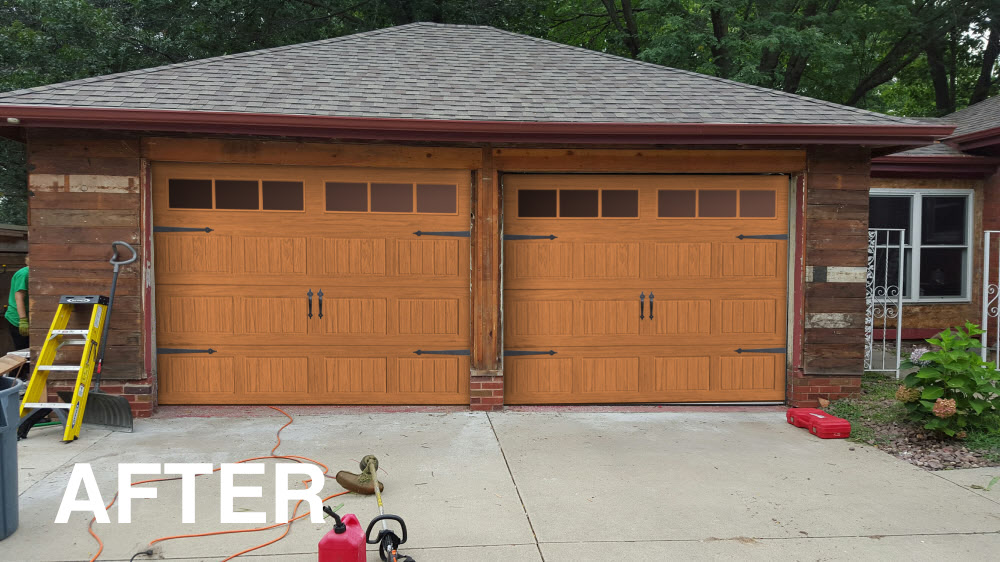 The goal of these homeowners was to create a new identity for their garage door rather than allowing it to go unnoticed among the siding. 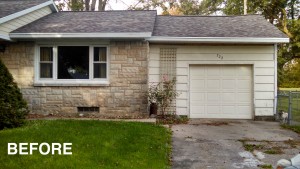 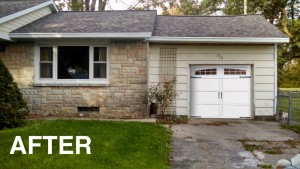 This is an effortless but noticeable change to this home! The plain brown was updated to a deeper brown with the addition of gorgeous windows. 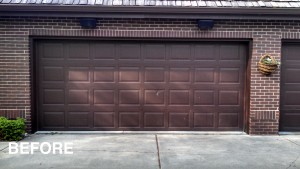 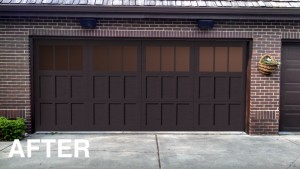 Remember, here at Overhead Door of Garden City, we are proud to be a part of such beautiful makeovers! Call us at 620-275-4602 or contact us to get your home and garage door renovation started now!

Do you have before and after pictures that changed your home? Comment below!! 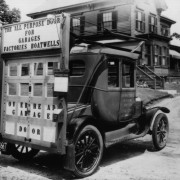 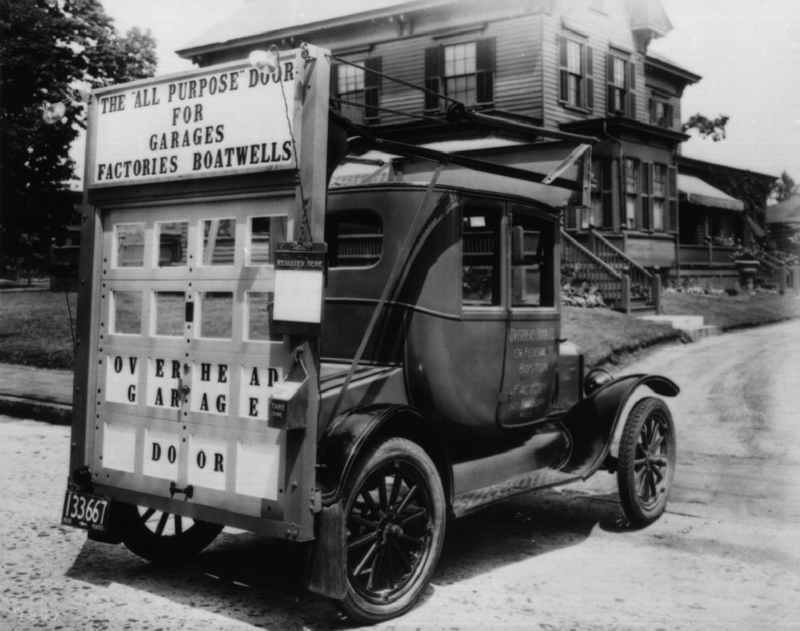 1921 — C.G. Johnson recognizes the need for an efficient way to house the vehicles indoors and out of the elements without using side-opening panel doors. Johnson invented the upward-acting overhead garage door.

1923 — Johnson built a miniature prototype of the garage door on the back of his Model T. Johnson and his wife traveled from one county fair to the next all across the Midwest in order to market his product. His efforts were successful and resulted in the need to franchise the territorial rights to manufacture and sell the doors to independent operators across the country.

1956 — The company establishes TODCO, acronym for The Overhead Door Company 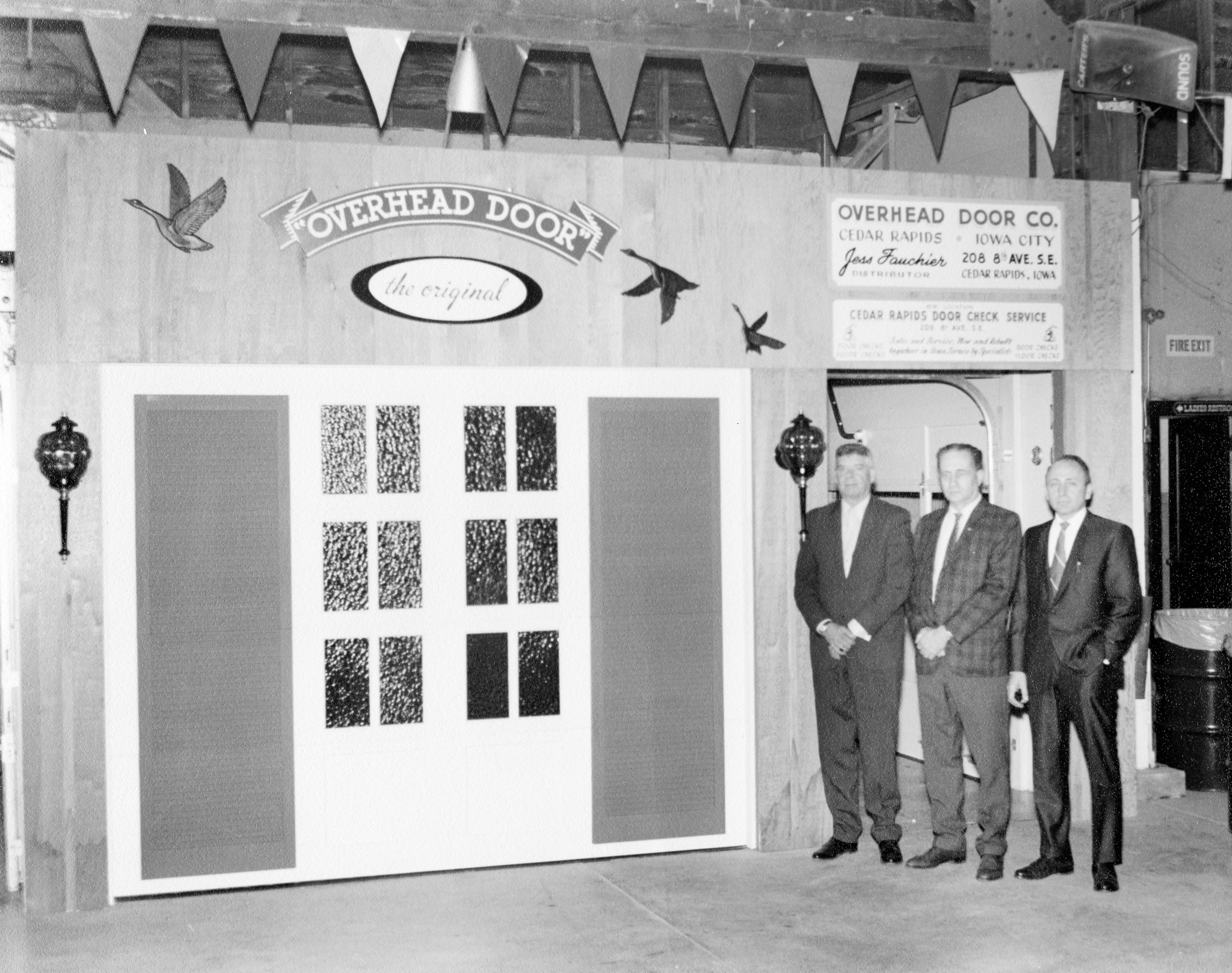 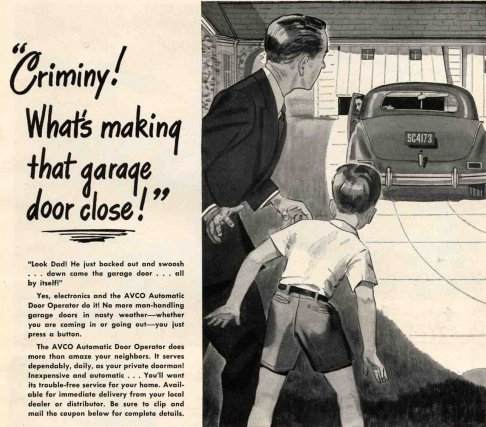 1985 — Changed name to Dallas Corporation to reflect the focus on more than just garage doors.

1989 — Appears that Dallas took on too many ventures over the past couple years. Company taken private again and name is returned to Overhead Door Company to reemphasize the focal point of garage doors. This also helps company take advantage of widely-recognized name.

Today Overhead Door is one of the most well-recognized names and brands within the garage door industry. We have 20 manufacturing plants and facilities throughout North America and sell our products across the world through more than 450 distributors. We have been around for 95 years and plan to be here for the next 100 or 200! For your garage door needs, call a company that has flourished through the test of time! Call Overhead Door of Garden City (620)275-4602 for all your garage door needs or contact us for a service appointment! 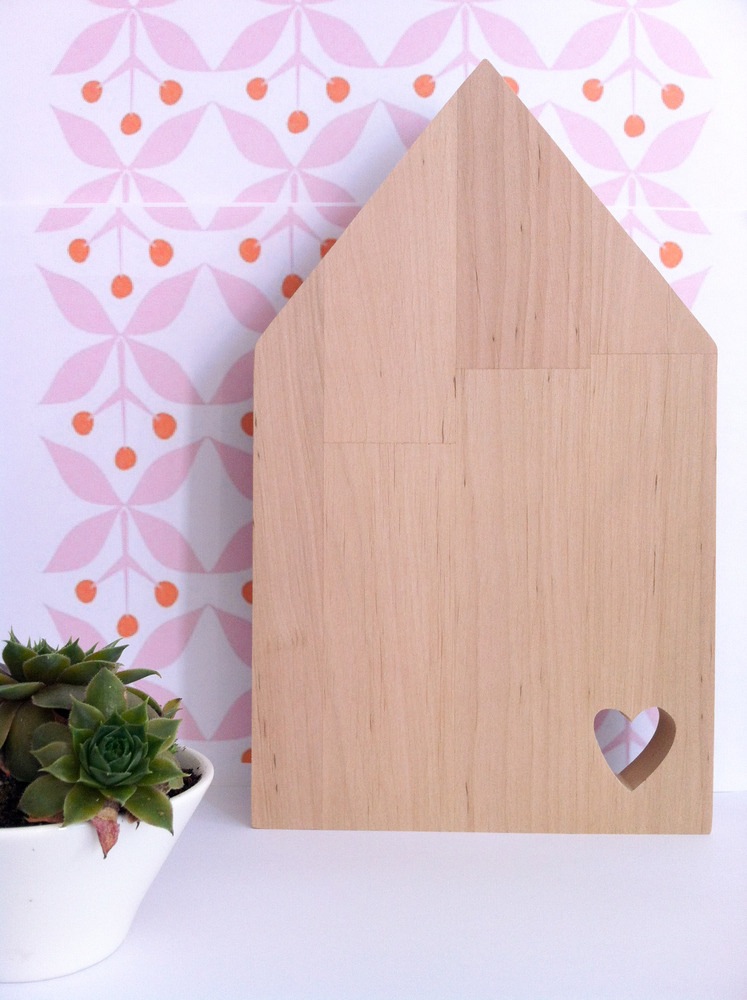 February is a month that is filled with love, chocolate, and flowers! It’s a chance to show your love for everyone around you! We all know a love story that seems to stick with us, one that keeps going and going and going, no end in sight. The love story between Overhead Door and the garage door community is just like that! It’s a love that started 95 years ago and the flame is still burning strong. Do you love your Overhead Door garage door and/or opener? Here are the top five reasons customers love Overhead Door of Garden City.

Best Products on the Market. Our company has been around the block a few times, we have taken the position, from the beginning, that in order to offer the best service possible, we must offer the best products. From residential to commercial options, we’ve got the garage door and/or garage door opener you need! And we have a huge selection, with more than 78 regional sales centers and 5,000 distributors, we have the garage door of your dreams!

Our Family Takes Care of Your Family. Here at Overhead Door of Garden City, we pride ourselves in creating a family-style environment. We remind ourselves during each job that it is our family helping your family. We want the best for our family and therefore want to best for your family. We have formed a crew of support and reliance and you’ll see it in our work!

We Improve Looks and Value of Home. A new garage door opener and garage door are investments that can greatly change the overall appearance and and increase the value of your home. So not only does your home become more appealing to look at, the investment will give you a greater return on your home! We have nine residential collections and four commercial options, from decorative traditional wood to modern aluminum to commercial UL 325 compliant doors, we’ve got what you need. What’s not to love?

We Stand Behind Our Work. There’s nothing like a big name company ruining its reputation by offering bad products. We don’t do that at Overhead Door of Garden City. We know that trust is hard to earn but easy to lose. And you can trust us to get the job done right! If you aren’t happy with the final result, we’ll fix it! We offer a 30 day service warranty and a one year warranty on new installations.

Our Garage Doors are Safe and Reliable. Our company philosophy revolves around the safety, security, and convenience of society. We are here to provide a sense of relief when it comes to the safety of your garage, your home, and your family. The garage door is the largest moving object at many homes, it is very important that it works properly and without concern. We do that for you.

The bond of love Overhead Door Company of Garden City has formed with its customers and community is one that can’t be broken! 95 years and loving strong. To see what all the talk is about, give us a call at (620) 275-4602 or schedule an appointment and you’ll feel the love too!

Do you love Overhead Door of Garden City? Let us know!

The task of “Home Improvement” is huge and usually overwhelming! Where is the best place to start? Which project should be put at the top of the list? How can I fix up my home in a way that I will see a return on my investment? One of the best projects to increase the value of the home is to upgrade your garage door. Buying a brand new garage door is not something you hope to do very frequently; it can be a pretty expensive venture. Fortunately, garage doors are a worthwhile investment especially if there is a possibility of resale in the future. If you need help deciding which garage door to buy, check out our garage door buying guide!

First, let’s take a look at how much replacing a garage door costs. Garage door costs are variable, depending on many factors: number of garage doors needed, the type of material used, style of the door, necessary installation, etc. The average price can range anywhere from $350 for the lower end materials and self-installation to $4,000 and up for high-end fully loaded door with installation. The average cost for a mid-range, installed garage door is anywhere from $750 to $1,500. While this is not the cheapest of home repairs, it’s pretty affordable compared to major home renovation projects.

Next, let’s explore the added curb appeal. The exterior looks and aesthetics of a home can be completely changed by upgrading your garage door. Higher curb appeal can can make all the difference when trying to sell your home. If buyers come to look at your house, they’ll pull into the driveway and be greeted by your garage door. Your first impression could rely heavily on the looks of your garage door!

Finally, and maybe most importantly, the return on investment. Replacing your garage door is unmatchably beneficial, this process can add tremendous value to your home. The exact return will depend on how much you are willing to spend on a new door, but on average, you could be looking to add about ten thousand dollars of value to your home. A fairly small price tag on this improvement is a way to greatly increase the value of your home, even on a budget!

Once you have decided to replace your garage door, you’ll need a quality door at a quality price! That’s where Overhead Door of Garden City comes in! We provide and install garage doors just for you! Check out our line up of garage doors and garage door openers and find your perfect fit!

The task of “Home Improvement” seems like a never-ending cycle. Once on project is done, it’s onto the next. But replacing your garage door is a task that can be done and checked off you list for years to come! Increase the looks and value of your home with this simple project! Call us at (620)275-4602 or contact us to get this project started!